At the end of the year, everyone who pre-ordered Atari VCS on the Indie Go-Go resource (a crowdfunding platform - an analogue of Kickstarter) was sent a gift. And while everyone is still talking about the new consoles from Sony and Microsoft (which will soon be joined by Nintendo's new Switch), let's find out what the beast is, this Atari VCS.

Initially, the release was planned for July 2019, but the console will only be available to the general public in the second half of 2021. The design of the VCS dates back to the original Atari 2600. The device is smaller but has the same wood front panel and louvered ribs. And to be honest, I like this design more than the consoles of the supposed competitors.

True, the wooden panel comes in a limited edition and the general public only has a simpler version of the design - completely in black.

Atari has partnered with gaming peripheral manufacturer PowerA to develop two controllers. The "classic" joystick is similar to the controller from the 2600. It is now wireless with a built-in battery. There are more keys: a second "fire" button, a power button and a couple more for managing the console menu were added on the side. Around the handle there is an LED backlight that reacts to its position.

Despite the attractive design, the joystick lacks functionality. How many modern projects can you play with one stick and two buttons? Thus, the controller is only for classic games.

The "modern" controller is reminiscent of the Xbox One gamepad with a pilot disc that replaces the conventional D-pad.

Both controllers are well-designed and available at a reasonable $ 60 price point. However, at the moment there are connection problems. A "modern" controller does not wake up the console from sleep mode, and its wireless connection takes a long time. However, future firmware updates can be expected to resolve these issues.

VCS owners can use third-party controllers: wired, Bluetooth and with USB sticks (for example, as the line of famous 8BitDo gamepads).

"Filling" of console and upgrade

The set-top box is powered by an AMD Ryzen Embedded R1606G processor with a Vega 3 video chip. These are notebook components designed for office use. Thus, the Atari VCS is not able to compete with the latest generation consoles from Sony and Microsoft. Outdated hardware can be attributed to a release delay of more than a year. Nextgen consoles are also inferior in performance to modern PCs, but not in comparison with budget processors. 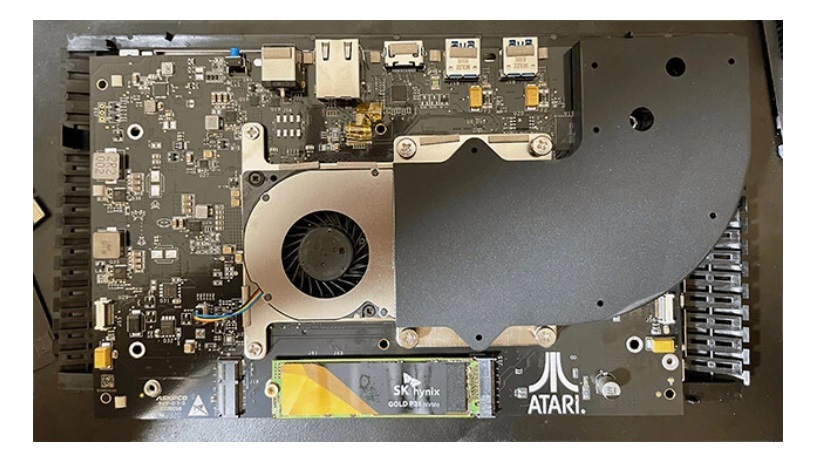 The box comes with 8 GB of RAM: two 4 GB DDR4 2400 SO-DIMM strips. The volume can be expanded up to 32 GB (16 GB x 2). The console is equipped with a 32GB eMMC drive, but there is an M.2 slot inside for installing a hard drive. You can also connect an external drive via USB.

Bluetooth and Wi-Fi connectivity leaves a lot to be desired. Both connections are often dropped, and Wi-Fi may stop working altogether until you restart the box. Fortunately, the Ethernet port works fine. Most likely, all these problems will be solved with system updates.

It is not very convenient to upgrade the console - the internal design and architecture were clearly not thought out. To add memory or install a hard drive, you will need to almost completely disassemble the device! If it were a PC, no one would have paid attention, but for a console it is unacceptable.

It is clear that the Atari VCS is not capable of competing with Sony and Microsoft, but it has a chance to become a replacement for Apple TV or Nvidia Shield. In PC mode, you won't be able to run modern games, but the indie Steam library projects will run smoothly. And of course, the console does an excellent job of emulating old games.

The Debian-based Atari operating system is extremely simple and not very instrumental. The OS serves as the interface for launching applications and games installed through the storefront. It looks nice but has performance issues. 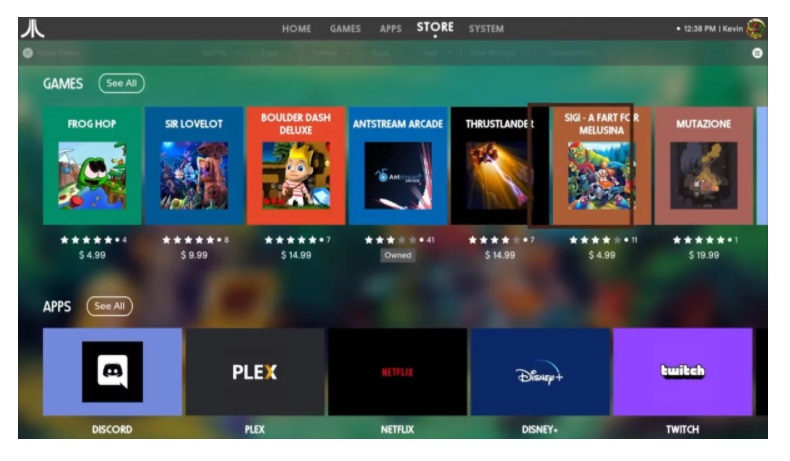 Although the console supports 4K, the interface is slow in this mode. Again, this will be fixed with firmware updates, but such hardware will not pull 4K even in an undemanding game. Obviously, this functionality is designed for streaming and watching videos.