What opportunities give the trader fluctuations in trading charts 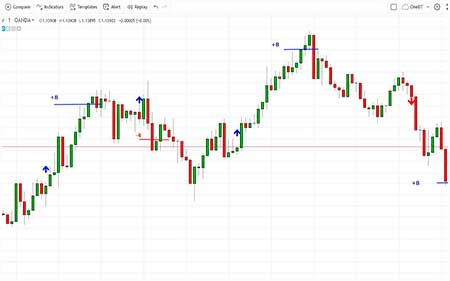 Traders and brokers do not work around the clock, they are usually active for 8 hours depending on their working area. Thus, every financial market in the world is open from 8 a.m. to 4 p.m. local time. However, thanks to the real-time opening of markets, professionals can intervene at any time of the day or night to take advantage of currency fluctuations.
Forex opening hours.
Forex closes on the weekend with the closing of the New York market on Friday evening at 23 am GMT. It resumes this week with the opening of the Sydney Market on Sunday evening at 22 hours GMT.
We distinguish three main opening sessions in the Forex market, which correspond to the opening of the financial markets of Asia, Europe and the USA.
Opening of the session in Asia.
In Asia, the Japanese market dominates Forex trading. The dominant time range in Asia is between midnight and 8 a.m. GMT. In this area, the main financial markets are the markets :
Sydney, open from 22: 00 to 6: 00 GMT, Tokyo, open from 24: 00 to 8: 00 GMT, Singapore, open from 2: 00 to 10:00 GMT, Hong Kong, open from 2: 00 to 10:00 GMT.
Opening of the European session.
In Europe, financial markets open from 6 a.m. and close at 20 a.m. GMT. The London market, the first major place in the Forex market, occupies a central place in trading, accounting for more than 30% of all transactions. In this area, the main financial markets are the markets :
Frankfurt, open from 7: 00 to 15:00 GMT London, open from 8: 00 to 16:00 GMT.

Opening of the America session.

Finally, deals at the American session are widely represented on the New York market. Other countries, such as Canada, Mexico and Latin American countries, account for a fairly small proportion of the total volume of operations in the Americas.
The opening of this session is mainly held according to the schedule of the New York market from 12: 00 to 20: 00 GMT.
Off-peak hours are from 21: 00 to 23: 00 GMT, when the opening of markets does not overlap, and the closing of the New York market leads to a drop in trading volume.
The best time to trade.
From the point of view of the schedule, there are two periods of time favorable for trading on the Forex market, these are the time intervals in which the two sessions overlap.
During these periods, the number of transactions is significantly higher due to the opening of many financial markets around the world. Consequently, prices are much more volatile and profit opportunities are high.

Duplication of sessions in Asia and Europe.

The first period of overlap falls on the morning from 6 to 10 am in Europe, during which the European and Asian markets are open.
At this stage, the processing volumes are especially large until 8 o'clock in the morning. It is also the time of publication of current economic data in Europe.
One of the primary crosses that it is desirable to trade in this time interval is GBP /JPY, since both currencies are active at the same time.
Duplication of the opening sessions of Europe and America.
The second overlap period is the simultaneous opening of the European and US markets from 10 am to 18 am European time.
This time range is the most important with the trading peak of the dominant parity in the Forex market: USD/EUR. At this stage, the most favorable hour period for trading is from 14 to 16 hours, during which the New York market is in a state of full activity.
At about 2:30 a.m., most of the economic information in the United States is published, including data on economic growth, employment and inflation, and European markets are not closed yet.
The most interesting parities for trading in this time range are, in particular, EUR/USD, GBP/USD, USD/CHF, which show significant differences.